NOTE: Be sure to read the previous two posts about this trip to get some context for this one.

This will be a short “segue” post to launch us on the road home.  It had been a wonderfully successful time thus far and I was still “high” on the prospects of doing a workshop based in Taos. I also had taken a number of images I was pleased with but a failed card reader meant I couldn’t see them and it was like going back to the film days when I had to wait until I was home and could process them before I knew what I had for sure.

But it had also been more or less non-stop with a lot of driving.  This day however, was different.  The only thing scheduled was a leisurely drive back to Santa Fe then relaxing, perhaps having a chance to read some of the material I was given by the Mabel Dodge Luhan House, until having dinner that evening with my old friend Jim (that was the subject of some posts on my visit to see him several years ago).

Morning arrived very brisk, in the 30s, and cloud covered.  Hot coffee was needed to be injected directly into the frontal lobe to kick-start the brain synapses.  After visiting the gravesite of Mabel Dodge Luhan, whose home place might be the site for the workshop, and seeing the grave of frontier scout Christopher “Kit” Carson, one of Taos’s early settlers, we headed south along the Taos High Road.  This goes through the mountain villages of Trampas, Truches, and Chimayo, then by the Nambe Pueblo and village where it rejoins to highway south to Santa Fe.

This is orchard and farming country and the spring buds were already out in some of the orchards along the way.  It was impossible to not stop and enjoy the brilliant new life waking from the winter sleep and shouting to the world it was ready for another year.

In some of the pueblo’s winter dances the pueblo women perform a unique step that contains a tapping motion on the ground.  It is to let the sleeping earth mother know they are still working to keep the balance so mankind can continue. It is a heavy burden because they know they are among the few still trying to maintain that essential balance between two leggeds and multi-leggeds, between living and spirit, between humans and the earth.  And they are fearful of the global consequences when that balance is no longer kept anywhere.  So they dance and tell the earth mother to be patient with them, they are still on duty.

But these new blooms brilliantly let them know they were successful at least for another spell.

An apple orchard near the New Mexican mountain village of Chimayo showing off it new spring plummage. Canon 5D MkII 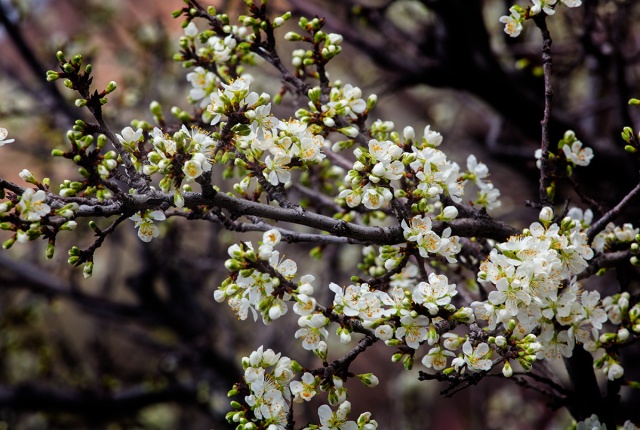 White blossoms on the road to Chimayo. Canon 5D MkII 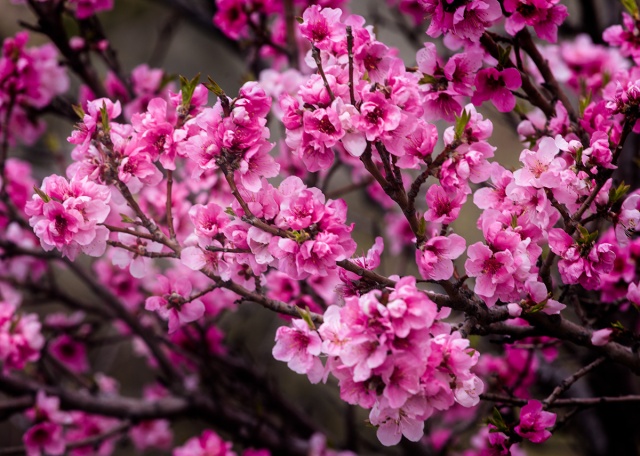 Brilliant apple blossoms like these lined the sides of the Taos High Road especially near Chimayo, NM. Canon 5D MkII

Driving was slow as local celebrants were filling the roads gathering for the traditional Easter pageants where they take the carved Saints from the missions and parade them through the villages on Good Friday.

Farther north in New Mexico and southern Colorado, the Penitentes reenact the story of the crucifixion complete with real whips (though not quite as brutal as real Roman “scourges” with bits of metal and glass woven into the thongs), followed by an actual crucifixion complete with nails but which is stopped before what would be a truly grim end for the lucky person who, among others, had volunteered for the role and been chosen only because of an exemplary life and reputation.  If anything would have driven me to an early life of sin and debauchery that prospect most certainly would have done it.

But at least along the Taos High Road life is a bit more peaceful and benign.  I personally think that is because of the influence of the native  Americans and their quiet beautiful ways.  In Trampas stands a beautiful old mission considered to be one of the very best examples of Spanish colonial architecture anywhere.  It has been used continuously since it was built in 1760.  The Mission San Jose de la Gracia has been in a constant state of maintenance and upkeep by the congregants since then.  This year’s storms have left some surface work to be done before next winter.

Here is the mission as seen through its front gate.  The blank grey overcast sky made me think of the old wet collodion and albumen prints where the negatives had an “orthochromatic” emulsion that was so hyper sensitive to blue/cyan that the skies were nearly always totally blown out.  So I decided to present the shots toned like albumen prints. The first shot is through the front gate…

Mission San Jose de Gracia in Trampas as seen through the front gate.

The second shot is from the side to show more of the building structure.  This structure too has the massive adobe buttresses. It also uses some connecting rooms as surrogate buttresses to help strengthen the walls.   Unlike modern construction where the walls can be tied together with steel, the vigas and lateas and final covering simply added weight which would push the walls apart.  The buttresses were all that held the walls up.

A more oblique view of the mission church at Trampas to show off its construction.

Yes, the two shots are toned a little differently.  If you look at enough old salt and albumen prints you quickly see that slight variations in mixing the chemicals and processing the prints led to slight color variations, print run to print run.  It was a very hands-on process.  Most simulations, from fake borders to simulated old historical processes are templated and all look alike but in fact, so much unique hand work was done they were RARELY all alike and each print had its own character.  Books and reproductions make them all look the same but that is very misleading.

After lunch, a little farther down the road at the incredible Rancho de Chimayo, we stopped to buy some Chimayo Chili to bring back.   The chili from Chimayo is unique in a rich smoky flavor and for my palate it is THE chili to use.  Not as hot as some (it can make your eyes water and nose run, but it normally is not used in such concentrations as to make your ears sweat or your eyes to glaze over) but the taste is far richer. A local farmer who raised it graciously opened his barn to sell us some and engage in conversation about the merits of chili and his time spent in San Diego.

We were surprised by the large flocks of people walking on the road.  Earlier it had been a trickle here and there but soon it was almost a constant stream.  There were people using canes, crutches and even elderly people using walkers.  Some were pushing baby carriages.  Some agency had put porta-potties out along the road and people were setting up shaded rest stops with water or whatever might refresh the walkers.

Well, it turns out that at the Sanctuario de Chimayo, less than a click from where we had lunch,  they have Holy Dirt.

Hey I’m not making this up.  And it gets better.   People walk – walk – they walk mind you,  except for some who crawl or “walk” on their knees – from as far away as Albuquerque – on a pilgrimage to Chimayo, where the goal is to get a small container of this Holy Dirt that they then apply to areas of their body needing curing from one illness or another.

Indeed it is considered to be one of the, if not THE largest pilgrimages in the country.  Who knew?  Now this dirt, pardon me, this HOLY dirt, comes from a small pit about 8 inches deep and 16 inches in diameter at the Sanctuario.  Each year there are so many pilgrims arriving over the Easter weekend that up to 20 tons of dirt are distributed among the pilgrims.  I’m not a mathematician so I’ll leave it to you, gentle reader, to do the math and see how that works out… But the next movie in which you hear John Wayne call someone a “pilgrim” you’ll now know what he is talking about.

We arrived back in Santa Fe and had a very expensive walk around the plaza.  I truly love the look of Southwestern clothing and jewelry. It is unique, practical, and very personal.  Especially the jewelry, made one at a time — and one OF a kind, each piece is a small piece of wearable art that, in my case at least, just grows in appeal the longer I am around it.  Oh well… it is only money…

We had dinner with another old friend, indeed one of those college friends from ranches further south than ours, Jim Neely, who was the artist/silversmith that made some of the jewelry I have including the turquoise bracelet and a large concho style buckle.  We went to college together and have been friends since the early 60s.

It is always good to reconnect with him and see what stunning work he is doing.  I had designed and ordered a custom hat and so worked a trade with him for a hatband since his bands are one-of-a-kind stunning. So with that part of the journey over, we would be heading back to San Diego in earnest the next morning but now the drive would be after an easy relaxing day.