For my Lighting Techniques class, the next assignment is jewelry.  For the first demo I decided to do a watch since it combines issues of reflectivity (metal band and bezel) and transparency (the face) for a fairly simple starting point.  I used to have a great collection of watches but during the “Tewa” project in the New Mexico Pueblos I stopped wearing them altogether.  But I’ve never been able to bring myself to throw them away so for this demo I selected a Seiko Chronograph.

I collect potential backdrop material whenever I see something interesting.  For this I used a piece of glittery gold tile I got at a local craft store (Michael’s).  I used the light table/sweep simply because it is at a handy height as a table top and it rolls around so is very handy.  The camera is mounted on a heavy studio camera stand arm so I could swing it out over the table and shoot more or less straight down on the watch.

Here is a lighting diagram of the set up. 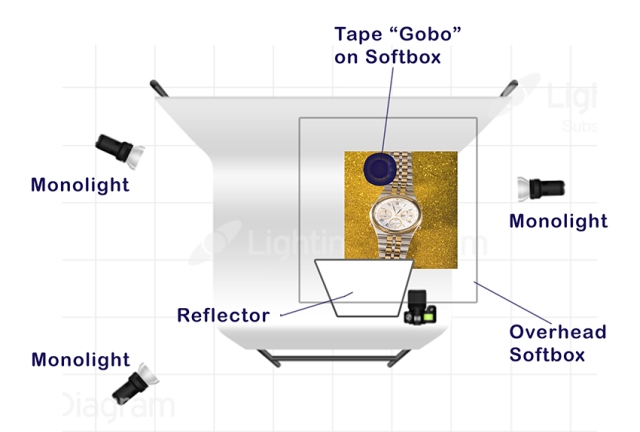 The main light is a medium soft box placed over the watch and aimed straight down to give a flat reflective surface.  That is what is lighting the metal parts of the watch and also the face (though it created a glare problem in the flat crystal face we’ll deal with a few steps below.

The strobes around the side are low and used simply to create some of the specular edge reflections on the watch to give some live and a sense of shape.  The small reflector is used to bounce light back onto the front of the band where it folded under and did not receive any light from the softbox.

I used a Tamron 180mm Macro lens on a Canon 5DSr to allow me some working room but also to nearly fill the frame for good resolution.  I wanted better control of depth of field in the shooting to make the glittery tile go soft but everything was so close, even with the strobes dialed down the required setting was at f-25 so depth of field just became an editing issue.  I could have created a stand and put the watch on a glass sheet a few inches above the background, which would have been the solution for a film shoot.  But this was digital and I could get on with it for the class.

Here is shot number one. 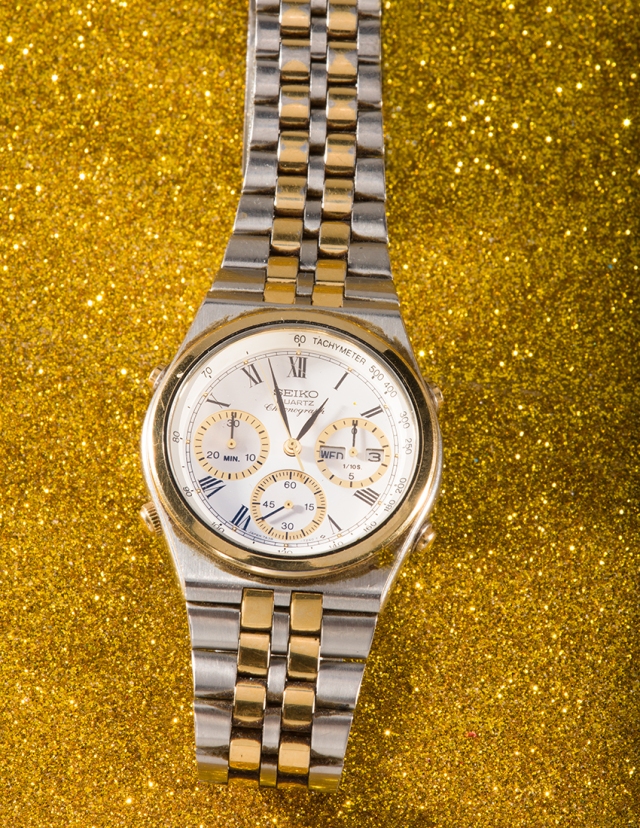 All photos in this post are (c) by N. David King, All Rights Reserved.  Shot with Canon 5DSr and Tamron 180mm f6.3 macro lens.

Well, except for the sharp glitter on the tile it is pretty close.  There is only one problem.  The overhead softbox is creating a glare in the watch crystal that is dulling the detail on the watch face.  Usually when dealing with highly reflective items we want to use and control that glare but in this case I wanted to remove it.  Since it was created by the reflection of the softbox, the solution is to selective remove the softbox.  Think of dodging light from a print in the darkroom.  Here in the studio, instead of a dodging tool I used something called a “Gobo” (standing for “go-between”).  I could have mounted one on a wand just like a dodging tool and fastened it to a stand or boom.  But because of the softbox there was an easier solution.

While I was looking through the camera, I had my student assistant move his hand around under the softbox until I could see the shadow block the light on the crystal.  I then had him place a small patch of blue masking tape where his hand had been, et voila,   the glare is removed selectively. Here is that shot.

Well, that’s about all I could do in the studio, it was time to head to the computer.

This was for a simulated ad so the first thing to do was crop the image to an 8 ½ x 11 ratio.  Then in addition to the sharp background tile issue, I thought the camera shot was a bit flat so needed to do a couple of things.  I needed to soften the background (using Photoshop’s “Lens Blur” so the specular highlights retained an optical look), and I darkened and vignette the background (using layer masks and “Multiply” blend mode) to help make the watch stand out from the background. 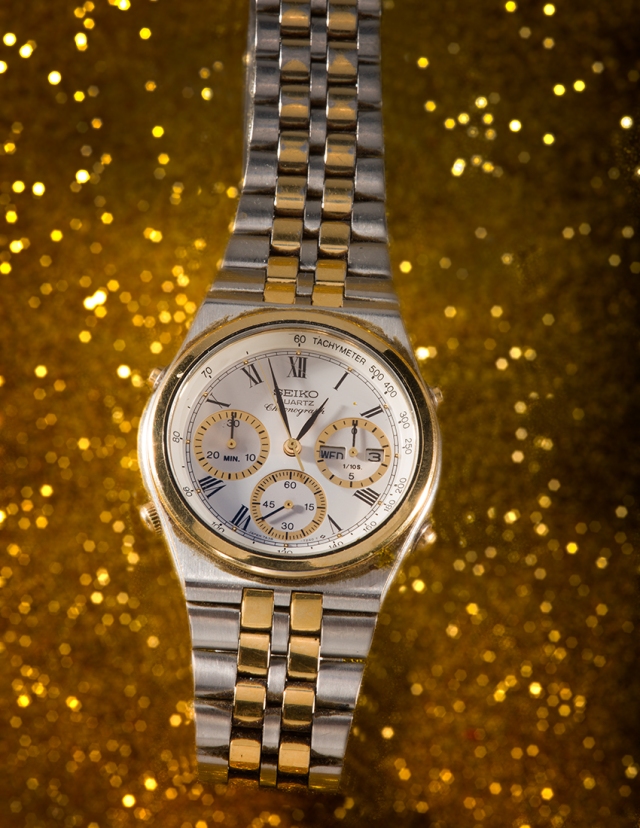 Finally I wanted to add some “copy” to the simulated advertisement page/poster and used Photoshop’s Text function along with the Layer Styles function to do that.  And here is the final image.. 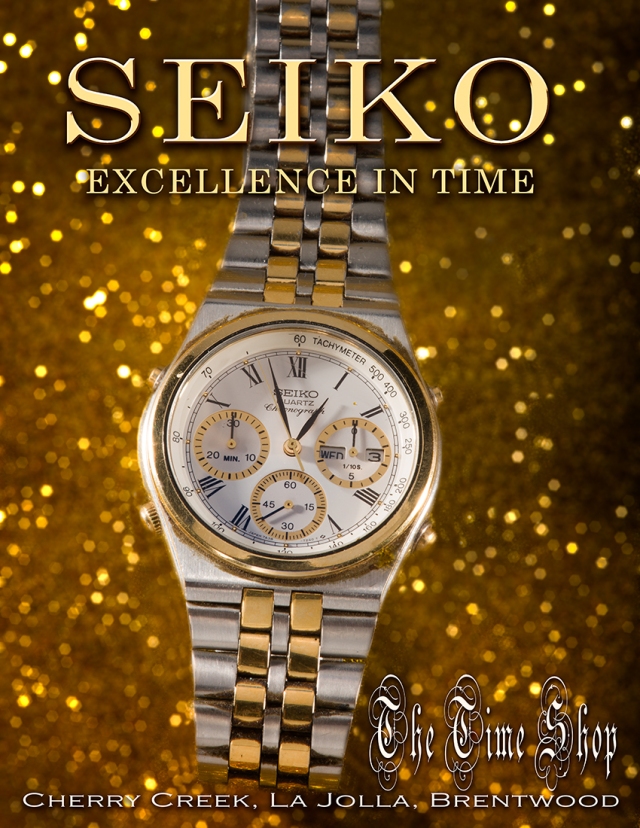 I did not have an exact match font for Seiko’s logo.  Were this a real assignment I would have had them supply one to use.  The Tag Line and shop name/locations are fabricated in my own fevered brain so there is no one else to blame for them.  The font for the shop name reminded me of the filigree of gears in a watch and it would be fun to design a real logo blending this into a shot of watch innards.

Next assignment will be food so that should be fun to demo!

Meantime, the “Video for Still Shooters” seminar is this Saturday so if interested look at the data by clicking on the link in the banner above and get signed up.

See you next time.