Thursday (4/20) I did a demo of food photography for the Lighting Class.  In a class lecture on the previous Tuesday we discussed plated vs. studio food issues and advertising vs editorial style shooting and I showed them a number of examples.

The studio demo gave me a chance to also demo and discuss a “tilt-shift” lens when one needs to tilt the plane of depth of field.  For this demo I used a Canon 90mm Tilt Shift f2.8 on my Canon 5DSr body.  The truth was I didn’t really need it for this shot but it was passed time to show it to the class.  I discussed how to apply the famous (infamous?) Scheimpflug Effect — which is a misnomer by the way but that is another story — to alter the plane of depth of field to make sure that this shot, to be done “advertising style” had the product all in focus.

One of the students in this class is a chef so at my request brought in the food to shoot, an egg white cheese omelet breakfast plate.  To add some sport to it, when he asked what I wanted I told him to surprise me.  It did.  Because it was a sort of “comfort food” dish I decided to use the old side of one of our much abused “apple boxes” as my table top.  He did the arranging/styling/food presentation so about all there was for me to do for the class was light it and shoot it.

Here is the plot… 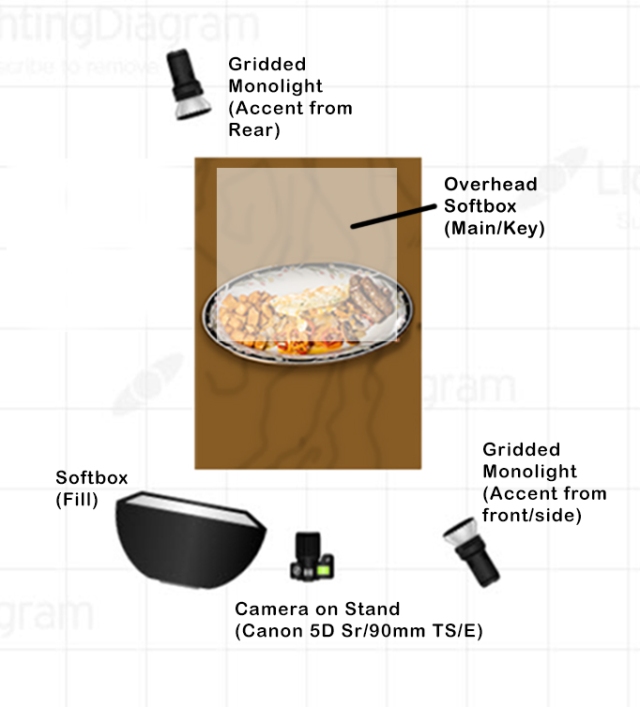 All of our studio lights are on overhead grids so it is easy to work around this small set area and not worry about tripping over cords and ground clutter which, if anyone will do it, it will almost certainly be me.

A small softbox overhead and slightly to the rear provided the primary light.  A larger softbox from the front and slightly left of camera provided the fill.  To make the food items stand out and provide some “sparkle” to them, accents and back lighting was created using  two of the monolights and standard 7” reflectors with attached honeycomb grids to control the spill.

I’ve used these lights so often now I cheated and just guessed at the setting.  A first test shot was amazingly right on.  I did have a little more shine added from spray vegetable oil and turned one of the sausages to better show the shine, rechecked it and then did the shot.  I looked at that in the monitor, slightly turned one of the sausages to better catch the accent light and took a second version.   I took some bracketed insurance shots as a precaution but the shots here are from that second shot.  I turned the plate slightly to see if I could get a slightly better accent on everything but decided against it.

This version was very straight forward to edit.  Here is the initial shot right out of the camera. 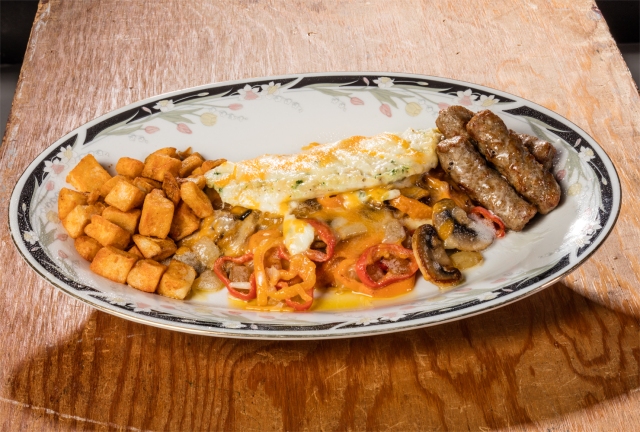 Hmmmm… well it IS sharp and exposed OK but to me it needed some “life” added to make it more appetizing and appealing.  To edit this in Photoshop I slightly cropped it, added a vignette and cleaned up the edge of the plate.  The only ‘non normal’ thing I did was selectively sharpen the omelet filling.  To do that I borrowed a technique from L.A. photographer Manny Librodo who created a sharpening routine yielding a very hard edged result almost like the original “Dragan Effect” but without the modified  and selective desaturation.

On a separate layer I applied the Librodo sharpening and then, with an inverted layer mask just painted it over the elements in the omelet stuffing in the front of the shot so the individual items stood out better.  (Below are the steps for that effect)

I also extended the wood table top to fill in the surrounding area simply using the clone/stamp tool.  And that gave me this version… 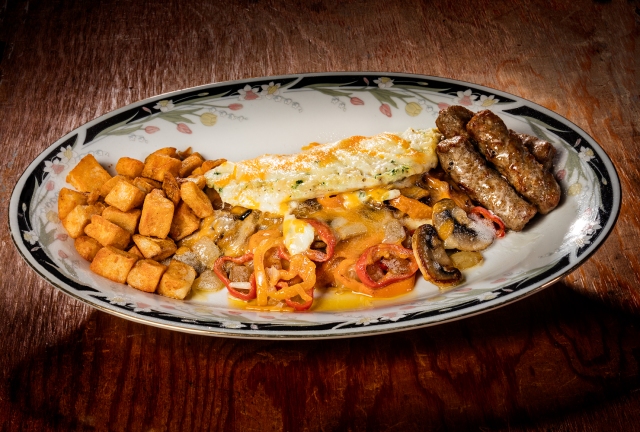 All in all it took about a half hour shooting plus another 10-15 minutes to edit it.  In the film days all of what you see would have to be accomplished in the shoot itself (except the selective sharpening) so using snoots, scrims, and very, very tightly controlled lighting it of course could be done, but I’m thinking maybe an hour’s shooting and to keep the food looking fresh that would have had to be done with “stand-in” food until it was right, then bring in the hero food, tweak it all, and shoot FAST. The reduction in effort, energy, and brain damage afforded by the digital options makes studio life so much easier and, I think better.

Now after my demo and it was the students’ turn to shoot, the student who brought in the food, rearranged the items and added some additional elements he had also brought to the plate of food, placed them all on a marble tile we had available and produced this final shot for his own assignment. 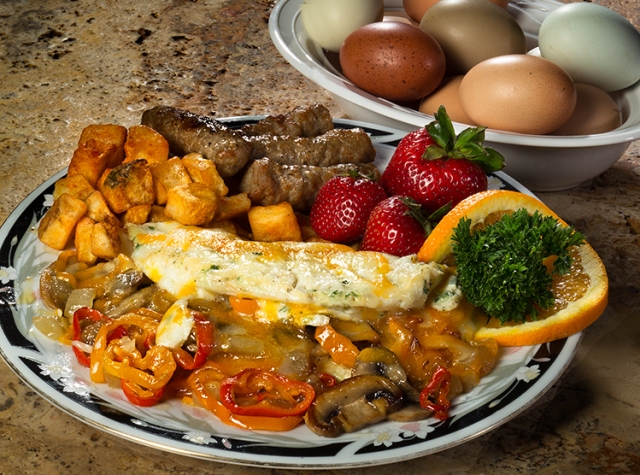 Its a nicely done version…!!!  For my own sense of style for food photography I might have used fewer items on the plate so the main item could be seen better with less distraction — somewhere between the two versions.  I do really like the additional splashes of color he added!  But this is a lighting class not a class specifically in food photography and styling so from that standpoint I think he did a very nice job.

By the way, as promised, here are the steps to the Librodo Sharpening I used.

You can then blend the sharpened and original unsharpened layers back to where you like it if it is a little too much and/or do what I did which was to selectively apply the sharpened area I wanted (the filling) using a layer mask.  I often use this to make small items such as rice grains or corn kernels stand out in a food shot and not look all mushy and run together.  I made it into an action to make life easier in the edit bay.

See you next time…