Not Quite a Maiden Voyage…

OK, I was really bummed.  My friend Steve Burns invited me to tag along on his Yosemite workshop a weekend about a month ago and I just could not make that work for me.  I’ve been way behind on all of the grading and critiquing for my overly full classes and knew that if I took off for a 4-day trek, much as I really wanted to, I’d end up being a basket case the entire time thinking about all of the work I was not doing.  I was already behind in dealing with specific questions, with the critiques (because my great Blue™ microphone died) and, to be honest, trying to avoid draining the treasury more than necessary after a couple of months of no income on my 10-month-basis contract at school and some other unexpected wasted expenditures with nothing to show for them.  So, sadly, I told him I couldn’t make it.  Waaaaaa…  Sadly, I’m not good at holding my breath till I turn blue.

So I really worked hard during the week at trying to catch up just to get that weight off my shoulders.  It was nose-to-the-grading grindstone; I even gave a test instead of a shooting assignment to provide a little breathing room.  So on Friday, two weeks ago, I was feeling pretty good about where I was with work… and the Roadtrek was just sitting there with its sad eyes, like a dog wanting a table scrap – you now, with that look that only a dog can give you that says they are starving and haven’t eaten in years and their very life is in your hands… or on your fork – THAT look..

Maybe a quick overnighter to boondock in the mountains or desert might not be so awful or irresponsible of me.. I could get some Milky Way shots, maybe do a painting with light shot of the van to get back in practice since next semester I’ll be doing the lighting class again.  Yeah, hey, it was actually school work… sort-a kind-a…  And I haven’t done any real image-making since the Bristlecone Pines workshop early in the summer so was getting a little twitchy around the edges. My spirit had been run through a virtual Cuisinart™ and I was looking but could not “SEE” anything to shoot; my creative fuel tank had been drained by a bullet through its heart.  Maybe a forced infusion of the right surroundings could kick start that image engine into at least some sputtering semblance of life and get me back on track.

Then just when I thought I was caught up and could afford the time for at least an overnight trek on the cheap, my left knee decided it had been too quiet for too long and so decided to act up.  As you might recall my right knee was replaced two summers ago (and now is giving me no problems…YAY!) but it was so awful during the recovery period – a period I could not have handled by myself were it not for my friend, Don, coming out from New England to help – I swore I did not want to even think about going back for the other one.  But that was then… this is now… and the pain that just dropped out of the sky to swallow me in waves of searing “discomfort” (as the doctors like to call it) made me rethink that oath because the new pain was not tolerable.  It was like my knee was being attacked by a dull chainsaw.

When it was obvious this annoyance was not just going to pass as a temporary flare-up, I went to the Daktari, who X-Rayed it and pronounced, as if it was going to be a surprise, that it was much worse than the last time it was X-Rayed before the surgery.  Ya think?!?!?

When I mentioned my resistance toward the surgery solution we decided to see if in-joint injections of some cortico-steroids would alleviate the situation.  Even if it was temporary at least it allowed my mind some rest, my body some sleep, and maybe be my brain able to make a more reasoned decision as to what to REALLY do about it.  The good news is that it seems to have worked and at least at the moment, the debilitating pain has subsided to a more or less tolerable level.

Soooo… let me recall… what was I saying about a little trek to road test the RoadTrek?  I’m still hobbling around with a walking stick but hey, I was not planning on a hike up Mt. Whitney.  Nevertheless, although a real camping trip was simply being masochistic (though I recall a coach once giving the brilliant advice to “embrace the pain”), I SOOOO needed to see some non-urban scenery, and after the election nonsense, get the urban engendered political offal out of my nostrils and did still think a small day trip could let me test how the Roadtrek would handle the dirt and washboards.  For example, before I headed into the great postcard scenery,  determining what may need to be secured better, etc., what kind of mileage I could expect and trip-budget for, etc., indeed would the coach handle that sort of pounding when I was still close to rescue?  So I hauled my heavily complaining knee up into the cab  and headed east.  That still is weird for me to say since all of my life in Colorado I headed west out of town into the mountains; but here if you head west you better be a really good swimmer.

A good exemplar back road is the Boulder Creek Road between Julian and Descanso.  Heavy washboarded sections due to heavy traffic moving too fast and inducing wheel-hop on the dirt, plus it also has some nice scenery and overlooks.  It has some great California poppy fields in Spring but this was not Spring.  And Fall had fallen a bit too long ago to expect any real color but that was OK since getting out and hauling a tripod into position seemed more like an exercise in self-abuse than anything likely to result in an image of real value.

There was an incredibly heavy fog and haze layer looking back toward the west and the ocean.  Along the horizon just over the mountains you can see the fog bank sitting there.  Even here, along the Boulder Creek Road between Julian and Descanso, it seemed clear up close but there was a heavy ultraviolet haze in the air that required some filtering to remove.  And here, in the dirt for the first time, is the “new” camper.  It performed splendidly.   (Shot with Canon S120 Point and Shoot   (c) N. David King)

So how did it do?  I’m pleased to report that the Roadtrek acquitted itself quite well.  A less than secure arrangement of trays I had placed covering the stove revealed themselves fairly quickly, a few loose items in the cabinets will need to be padded or restrained to keep them from banging around, but otherwise that part of the test was a success.  The new brakes were wonderful as was the ride from the all new heavy duty shocks, and most of all, the big block 454 handled even steep pitches as if they weren’t really there.  For all of its size, weight, and extended wheelbase, I was surprised how (relatively) nimble it was and the “draw in” of the rear wheel track was not as pronounced as I anticipated – a good thing.  The only thing I need to get a better handle on is the exact placement of the rounded rear edges and spare tire that I cannot see.  Maybe a back-up camera would be a good investment…??? 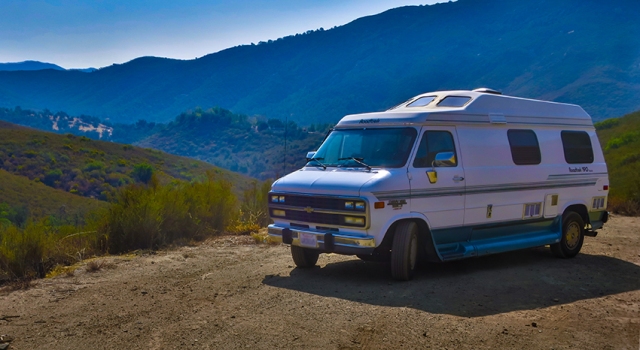 This shot is looking east, away from the ocean.  It is clearer but you can still see the haze turning things blue despite a good UV filter.  This is taken on a curve along the road and the red reflection in the side is from a reddish-brown arroyo wall from which this part of the road is cut.  Shot with a Canon S120 Point and Shoot. (c) N. David King

Oh man I really wanted to haul over at several very cool spots and just set up to spend the night — anything to avoid going back to town.  But everytime I got out to take a shot of the van, even with my little  point and shoot, my knee reminded me that all of my pain meds were back at the house and overnighting without them would be a decision I would very likely seriously come to regret.  So, regretfully, I laid the reins over its neck and pointed the Roadtrek’s nose toward town.  And back I came.

So, a couple more tie-downs, some bungees… some time-windows without having to get back to complete already overdue school work… perhaps a better feeling knee… and I am ready beyond the telling to load in some camera gear and head out.  Where? Who cares?

Commercial Photographer and Professor of Photography at San Diego City College
View all posts by ndking →
This entry was posted in Uncategorized and tagged Class B, landscape photography, photography, road trips, Roadtrek. Bookmark the permalink.

2 Responses to Not Quite a Maiden Voyage…