Dealing with Nature – PArt 1: Letting It Talk to You

To paraphrase Minor White, an iconic figure in photography and photo education, (and the author who co-wrote the book that made Adams’s “Zone System” intelligible to us mortals), if nature sees in you a heart it can trust, it will wait for you.  I’ve found that to be true but it will do a lot more than that: it will even tell you HOW to it thinks you should photograph it.  Like a stereotypical Hollywood starlet who knows her best side, nature knows itself and will reveal that knowledge to you.

The problem is that nature’s voice is so soft and quiet, the photographer whose ear drums are calloused by the raucous noises of the city, cannot easily hear it. It speaks in a very quiet whisper as it interfaces with your spirit and mind and via recalled memories speaks metaphorically to you.  Some of you sci-fi and “trekky” fans may recall a “Next Generation” story of the crew trying to communicate with a race that only spoke in metaphors.  Well nature is like that and, to make matters worse, it only whispers.

Now if you come out with some preconceived idea of what a scene is all about then by all means keep the ear phones blasting heavy metal and blaze away.  Then you can add your postcard snapshot to the several billion nearly identical shots of that amazing scene.  For example, when you pull into the parking area at the “Tunnel View” overlook in Yosemite, go ahead, run to the overlook and take the shot.  It’s beautiful and if you can shove your way through the crowd (especially if a tour bus arrived a few minutes ahead of you) then by all means, go ahead and get it out of your system.

But then settle back, let the crowd disperse, and consider this: art is the product of interpretation – not of narration.  The artist (we’re talking photography here but it applies equally to painting or drawing) seeks to understand the subject, filter that understanding through their own experiences, histories, associations, emotional responses, etc. and then, using their skills and mastery of tools, create the image that (it is hoped) will best render that interpretation. In short, the artist/photographer endeavors to capture NOT what specifically they SEE, but what they FEEL.  But, for that image to be honest and accurate, that process starts with understanding, and that understanding is best achieved by letting nature tell you about herself while letting you tell yourself a bit about yourself.  That does not happen in the blur of a rush to get your shot before having to get back on the bus.

So how do you start?  You start by letting your heart tweak you when it recognizes something important. When you are moving through the landscape, clear your mind of other thoughts and sounds and disruptive things.  Just open yourself to the sensory input from your surroundings.  When it happens, that tweak might be a gentle nudge that makes you want to pause and look again, or it might be a strong kick in the gut.  There might be a quiet moment of recognition or a hard jolt to your senses.  But when it happens, the very first thing to do is STOP.  Sit down if you can.  Be STILL.  Give it what a barbarian friend of mine used to call “The 30-Second Stare” where you get quiet and still and really start visually and emotionally inventorying the scene in front of you.

That friend first used the term with me to address a major problem back exploring in the Rockies.  His definition of an “adventure” was the result of a failure of planning.  He believed we actually knew what to do but the panic and fear overwhelmed us and we could not access the data needed.  Hence… the 30-second stare (in my case it often took a bit longer…) to quietly assess the situation, look at intended resolutions, examine the resources needed to solve it, and then set about doing so.  But it is exactly the same exercise needed to let nature talk to you and help you hone in on how it wants to be rendered by you and you alone.  Another artist will respond differently and interpret the scene differently.  That is why it is an art not a science.

Start a series of “What” and “Why” questions and drill down as far as you can go.  First, as you scan the view in front of you, ask yourself what specific thing in that scene was what actually caught your attention.  A tree?  A rock?  A lake?  A trail?  A structure? A leaf?  A cloud? Or was it the awesome visual power of the whole scene? 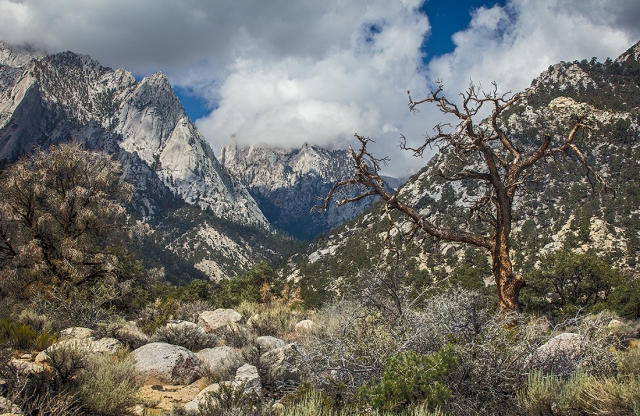 Storm drops over Mt. Whitney and down the Whitney Portal Canyon in the Sierras of California near alabama Hills and Lone Pine

I once was given the project of updating the off-road trail maps for a large section of the Colorado Rockies.  We were given the original USGS topo maps the original teams had used and which had their notes on them.  They had marked places they thought would provide great vistas usually with a simple icon.  But in all of the maps, there was one only spot where the team, in a red marker, wrote the single word “WOW!”  We had multiple vehicles and had split up sections and another driver had “drawn” that section to cover.  Over the radio he hailed me in this excited voice and I thought maybe he was in trouble.  But he said to me, “Do you remember where the map had the note, “WOW!” on it?”  I said I did.  He simply said, “’WOW’ doesn’t quite express it…!”  We lost a day’s work but the entire team stopped where they were and went to see for themselves.  Wow.

Any and everything could be a potential magnet for your attention here, even if meaningless to someone else, so don’t overlook the tiny while overwhelmed by the mighty.  Remember the old adage about not seeing the forest for the trees?  Well, here, don’t fail to see the trees for the forest… or the leaf for the tree.  And don’t worry about what others see or feel.  Your art needs to express YOU and your reaction, not theirs.

So whatever it is that has caught your attention, sit and study it; let its presence flood your mind and heart and then ask yourself “Why?”  Why did it grab you?  What was it about the object that captured your attention?  Was it the shape, the form, the texture, the color?  And then ask “Why?” again.  What emotion did that elicit from you?  Awe?  Terror?  Something pleasant?  Something irritating?  And then again, ask, “Why?”  What is it you are remembering from your own experiences or history that was triggered by seeing that object?  What does it remind you of?  Why does that memory elicit the emotion you felt, however weakly?

Now work your way back up the chain.  What is it about the subject that most strongly elicits that emotional response?  Now review the whole scene.  Does the response come from the subject alone with the rest of the scene remaining more or less irrelevant?  Or do other elements in the scene support that response or even add to it? What is the real core of the scene – the focal point?  What elements need to be eliminated or subdued?  What compositional devices, e.g. use of perspective, directional lines, element placement, etc. would best convey your response?

When you have those answers… you have your image in mind.  Now and only now is it time to get technical.  What is, based on your mastery of the craft and tools of your art, the best platform for you to create your image.  What vantage point?  What lens?  What aperture?  What shutter speed?

So what’s holding you up now? Don’t just stand there with your face hanging out…take the damn shot!

Skip Cohen, photographer and instructor, wrote that you can’t tug at a viewer’s heart strings if your own heart is not in the shot.  Once again for emphasis: quite worrying about capturing what you see and start putting everything into capturing what you feel.  That lets you present to the viewers something they would not or could not have seen themselves, would not or could not have felt and experienced for themselves – and that is YOUR response now available to them.  You can practice that anywhere and should be doing something concerning your photography every day.  Then you’ll be ready for finding those stunning images when heading into the bush.

But some people are really nervous heading off the trail and out into nature.  But if you learn nature’s rules and follow them, a whole new world of wonder can open before your eyes. So next time, we’ll talk a little about the “rules” so you can be safe and comfortable out in nature.

2 Responses to Dealing with Nature – PArt 1: Letting It Talk to You