Photographing THE House – Part One

My colleague at City College, Sudie Phillips is the department chair for the cosmetology program located in the same building as our photo program.  Several weeks ago she told me that her husband was nearing completion on a house he had designed and asked if I would be willing to photograph it for them.  They had looked at my work and decided I could do a credible job for them.

It is always nice to have friends say they like your work, but to present you with a real gig is especially meaningful.  Talk is cheap but when someone recognizes your efforts and is willing to pay for them, that means they must REALLY like the work.   But I was trying to finish up the Veterans show and had no time.  But I did tell them I’d go out to see it one evening just to get an idea what was going to be needed.

I am not sure what I expected, but whatever it was, it was so inadequate to describe the house that it would be like expecting a country bungalow and then turn the corner and see Versailles.   When I pulled up in front at the appointed hour all I could do was stare at it.

To say I was blown away would be a galactic level understatement.  And as Sudie and James gave me the tour I was overwhelmed.  Good Grief!!!  One could make a career out of photographing this place.  It was clearly a subject that demanded a photographer have some help to shoot it properly.

So I got the “Voices” show up and the opening under my belt (described in previous posts) and then in a display of bad timing we had a week of gray, dreary weather.  However, that gave me time to formulate some plans.  Obviously I could not do everything in one shooting session especially if I wanted to combine exposure blends and/or HDR for the exterior shots and some views from inside looking out.  But one needs to start somewhere and doing some test shots to select points of view, lenses, techniques, etc. seemed called for especially since the house is actually not finished and not quite ready to shoot professionally.  But being able to do some preliminary work could save time for the “real” shooting sessions and, who knows, we might even get some keeper shots.

One of my better students, Angelica Wauman, has produced some very good architectural imagery including winning a blue ribbon at the SD Fair with a graphic detail shot of a local foot bridge.  She has a great eye for fine detail and that is what was going to be necessary to complement  the overall shots and create a comprehensive high grade photographic “essay” of this incredible property.  So I asked her to accompany me on the test shoot to get a feel for the house and the “real” photos to be done soon.

Here are a few shots from the test visit along with notes to help us get ready for the final shoot.  They will hopefully let you see the reasons we are anxious to do the real work.  Due to the extreme dynamic range of the setting sun over the ocean and the gleaming white structure, all of these shots involve either HDR or Exposure Blend techniques.

Here is the view of the house from the street.  This shot (and a number of others) tells us we need a higher angle so we need to make sure a ladder is available or that we bring one. 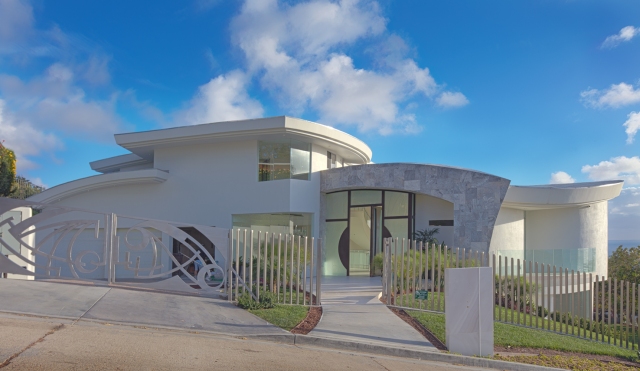 Incredible house in La Jolla, CA.   Exterior of house shot on first test shooting.  For the real shoot we will need to watch for doors and people in the shot.  The open gate is also a real work of art but it covers the elegant front door.  So a ladder will be called for to gain a better view. Canon 5DSr with Canon 24mm TS-E Lens

On the lower level is an infinity pool and an infinity spa/hot tub.  Taken from the far end looking back at the house hints at the extent of the house.  It does start to show the amazing curvilinear design that, to me, looks like a Frank Lloyd Wright house that melted.  However it took a full-frame fisheye lens to get the shot below.  I could not back up any more without falling off of the landing and tumbling into the canyon. So for the final shoot we’ll shoot it as a panorama plus gain some elevation with a ladder. 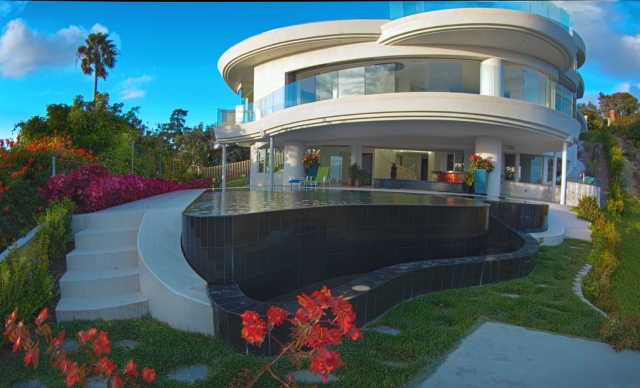 Pool area from the far end of the property. Taken with Canon 8-15 mm lens set to 15mm full frame fisheye.  For the real shot to avoid the distortion, much of which has been corrected for this shot but still has some barrel distotion, we’ll shoot it as a panoramic image made from several frames plus we need a little more elevation.  For scale almost directly in the center is the silhouette of Angelica working on a detail shot.

Looking back toward the pool from under the porch, actually the reverse of the shot abover. In this view you can see the ocean to the west as well as the back edge of the curved banco around the fire pit in front of the pool and spa.

View of pool, spa, and fire pit on lower level looking out over the ocean. Shot with Canon 8-15 mm fisheye at 15mm.

Clearly some staging, additional lighting, and the use of props… and perhaps even a couple of models would help bring this area of the house to life.  Here too a little elevation to the camera’s view would be helpful. The back of the banco hides the fire pit so either the angle needs to change or it will take a separate shot.

The elegant living room, with its interlocking pocket doors offers a grand view of the ocean and a cozy fireplace.

The living room as seen from the kitchen level looking out to the ocean. The curved, interlocking (and of course, motorized) pocket doors/windows are withdrawn into the wall to the left of the fireplace. Shot with Canon 24mm TS-E lens.

Other areas of the house were not yet ready but Angelica took some details anyway including a delightful fisheye view of the circular staircase going from the lower pool level through the living room and kitchen level up to the master bedroom floor which, of course, is also reached by its own private elevator.

After we shot, James and Sudie took us out for a dinner and dessert in La Jolla.  It was a very productive test shoot and a great evening.  The talk on the way back was all about ideas and plans for the real shoot.  I had wondered if Angelica would be interested in being part of the real shoot and the answer was an emphatic “YES!”

We then got together to review our collective shots, take notes on shooting plans plus desired props (such as glasses for the outdoor bar in the pool level), equipment (such as a ladder and some lights plus a spherical panoramic head to take the wide shots and avoid the wide-angle distortion of the expansive rooms and views) and things to watch for (open doors and people in the shots, for example). We also divided the house into areas, each one to have a day’s shooting all to itself.

The house is such an aesthetic bit of live-in sculpture it had two conflicting photography needs.  On one hand it needs the traditional straight architectural approach for marketing and editorial uses.  But it also begs for some creative imagery that may not be all that useful for sales purposes.  I think we will try to do both!

We are in the final two weeks of classes at City College that includes the chaos of finals both exams and portfolio reviews.  But once the Christmas and New Years break starts we can schedule the real shoots.  That will also give them time to further complete the work.

As we tackle this project I’ll document the work and approaches plus any special techniques used.  Meantime, the house will be put up for sale once it is completed so if you have a spare $10 Million or so you can snap up this incredible one-of-a-kind house.