Mountain Idyll before the Storm

After my planned trip to Santa Fe fell through, my dear long time friend Brooke Medicine Eagle invited me to come up to a “cabin” where she was staying near Julian. In some deep inner turmoil about my impending decisions re chemo and retirement specifics from City College,  it seemed to me like breathing some clean mountain air was something that would help get my mind off of things and let them percolate to some resolutions in the background.  So I accepted.

The address is back in the surrounding country side where a labyrinth of roads form a maze of home plots, many laid out years and years ago when this area was where wealthy San Diegans build their summer and second homes so they could get away from the city.  But the post office, a few years back, decided EVERY place needed an official address so The Garmin GPS had no trouble getting me right to the entrance.

A view of the cabin from the east side looking west.  This shows how beautifully it is nestled into the surrounding environment.  Parking is up the hill to the right of the photo.

When I pulled into the driveway the first time and looked up it was not at all what I expected. To call it a “Cabin” is a massive understatement. It is an incredible mountain home wonderfully nestled in the manzanita, cedar, oak, and ponderosas.  A carefully crafted stone walkway through some flower beds took me to the front door.  Inside was a design I’d not seen in retreats since the late ’40s even including an indoor stone barbeque grill in the kitchen.  The main room was huge, lined with book shelves and with a long banquet table and a nearly walk-in sized stone fireplace complete with swinging pot hook.  A sun porch and an open deck area brought you right into the surrounding forest.  For me, this perfectly combined appealing rustic with just enough modern amenities to make for easy living.  But it got better as I stood there, taking it in.

Quiet and serene with an aura of peace and calm infusing the house and surrounding grounds, this was precisely what my troubled spirit needed. It was late afternoon when I arrived so we sat on the south-facing porch to watch the day draw to a close.  The Cuyamaca mountain range forms a ring to the west and south, and to the east somewhere through the forest would be the ocean in the far distance and San Diego.  But here, the bustle and frenetic energy of the coast was far away and completely filtered out by the trees.

Of course, in the way of the western-raised folks, we chatted all around any really personal topics at first.  I first met and dated Brooke way, way, way back at The University of Denver in the mid-1960s so we knew and were comfortable together even after all these years and, for both of us, all these miles.  The “cabin” has a large stone fireplace so after dinner we repaired to a place in front if it and continued to chat about pretty much everything imaginable from our various work issues to aliens and crop circles to the state of the world and its future.

The next morning, Brooke had scheduled some phone-based client sessions so I took advantage of the time to wander about the grounds and general area.  Whoever laid out the landscaping did an incredible job of blending the human design ideas into the natural landscape. Here and there were even benches to sit and just soak in the ambient beauty and peace.  It was quiet and serene, but actually filled with life and far from silent. 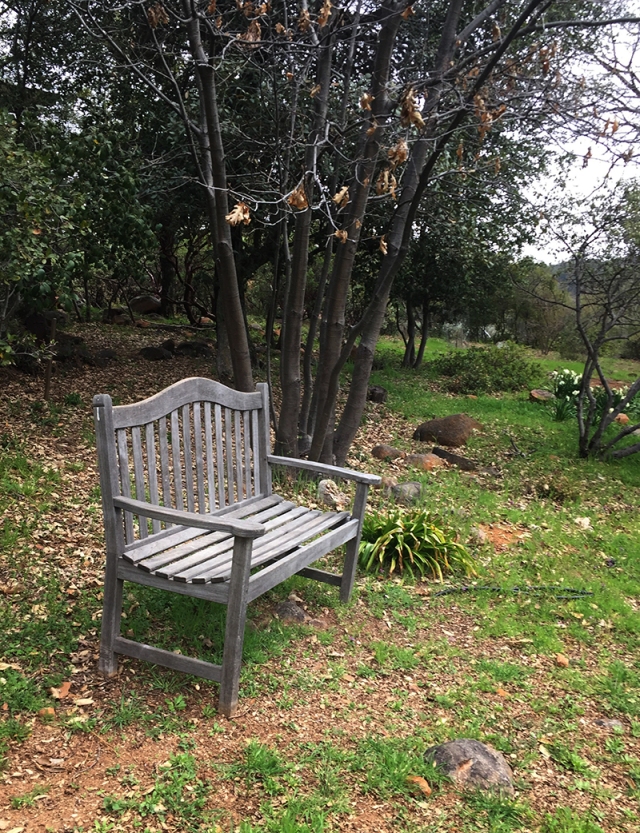 Here is one of several benches scattered around the property to provide places to sit, meditate or just soak in the lovely surroundings.

Some crows were loudly discussing the day’s adventure nearby. A tiny bird chirped a warning at me as I got a little too close to its nest. In the forest out of sight a woodpecker’s tapping announced its search for some tasty insect larvae. Deer tracks, freshly made, dotted the area where they had come to nibble the lush (if not natural) grasses. Next to them in the soft dirt, still not baked dry from recent moisture, was a canid print that could have been a coyote or simply a neighbor’s dog wandering through.

What an idyllic place. I’ve spent much of my life growing up in the forests and mountains and find such places especially comforting and even welcoming as if old spirits looked up, recognized me, and came out to greet me again.  I confess, I was instantly so inappropriately jealous of Brooke for her access to this place where inner turmoil was gently soothed by the quiet singing of the trees in the gentle breeze. And then as that low class sentiment passed, I was grateful for her for sharing it with me.

When slapped in the face with mortality there is nothing so appealing and awe aspiring as the wonder and magic of life in all its forms. And for me, that is especially true of the new spring life like the surrounding riot of colorful blossoms that so very recently were still under a blanket of snow. 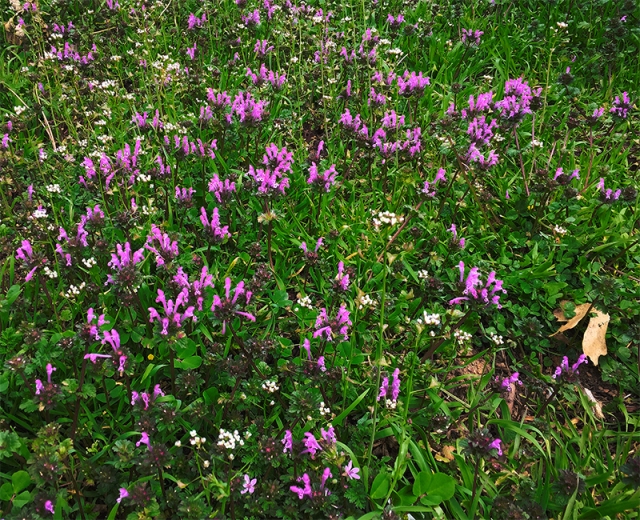 The wildflowers were everywhere, proudly announcing their return from a winter slumber and ready to brave, for them, a new year. Note the tiny white flowers mixed in among the purple ones.  I’ll have some thoughts and more photos on them a little later in this post.

I’m not a botanist or expert on such things so for the most part I had no idea what I was looking at or photographing.  But I had no trouble realizing I’d been privileged to see some spectacular displays of vibrant color including this knock your eyeballs out brilliant yellow… especially against the blaze red of that leaf.

Here was a natural version of the wild English Gardens I’ve always loved where various types of flowers all mixed together in a perfect display of togetherness. 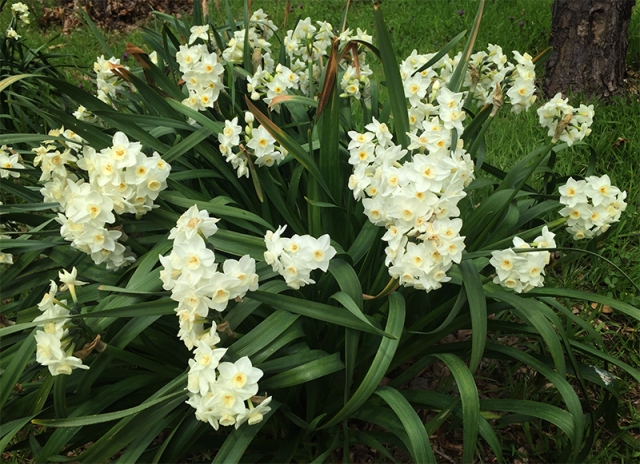 I didn’t know it was possible, but here and there were flowers I think are beautiful but domesticated.  But they were scattered in amongst the wildflowers as if this and other clumps had escaped the too restrictive confines of their tended gardens and struck off on their own to explore the wilds surrounding them, meet the neighbors, so to speak,  and simply be free to face whatever life threw at them.  I could only think these were not youngster flowers seeking to be kept safe by the gardener’s ministrations, but older, braver, tougher plants willing to risk it all for a breath of fresh air and freedom.

Back to the little white flowers.  You may have noticed in some of the other photos, scattered all through the other flowers and fighting for space in some of the grassy areas, were these tiny little white flowers.  They were so small that even a small insect landing on them bent their heads down to the ground.  The inset shows them closer and each of those buds is under 1/8 of an inch!  Yet they are as detailed as larger cousins.   I couldn’t believe that were large enough to provide pollen for the insects and bees.  Maybe, I thought to myself, they served another even higher purpose.  When an artist produces a piece they know is good, it gives them pleasure just to look at it.  So maybe the Creator of these flowers made them just to to be able to look down upon them, smile and then laugh at a beautiful creation, well made.

For me, there is no better time to surround yourself with the story and wisdom of new life’s cycle than spring. Here, everywhere you turned or looked up or down, there was the new growth of trees and bushes and the blend of wildflowers and some domestic flowers that had courageously escaped their little caged plots and marched out into the wild and taken root.

Even the Manzanita, with its incredile red bark, was in full spring bloom!

I had, when leaving the city, at the last minute decided not to take the RoadTrek even though I had loaded it for the trip; and so I drove off leaving my camera gear stowed in it at the ready.  I didn’t remember that oversight until I was almost at the cabin but then there was no going back.  All I had was my phone, an older iPhone 7 and that is what all of the images were shot with.  How frustrating it was not to have my great macro lenses and tilt-shift lenses… For a nano-second or two I thought of not taking any shots at all, but, get real, I could have more easily flown to the moon under my own power than to walk through all of this new life and not at least tried to capture some of it.

This plant did not need to festoon itself with garish color, but settled for fine exquisite detail to catch and draw the eye,  This could be inspiration for Zuni styled “petit-point” turquoise jewelry.

Even the wind-blown debris accumulating on one of the cabin’s porches could not help but arrange itself in an artistic, almost mesmerizing way reminiscent of oriental calligraphy or a pine-needle based-mandala.

Jeff Goldblum’s character in “Jurassic Park” notes that ““Life will find a way. “  These flowers have proven that to be true. They survived, despite their fragile appearance, a harsh winter wrapped safe in the blanket of their mother earth and now, with the cold and dampness and long nights beginning to give way to the warmth of summer, they are lifting their heads again and with their color as their voices, declaring to the world, “I am still here!”

Now with chemo starting next week, it will be my turn to try try to prove it true for me as well.  I can only hope to do it marginally as well.

I spent the rest of my little trek trying to glue the spirit of this place into the pages of my memory banks, to commit to memory the sound of the wind song, and the calmness in my heart of sitting among these brave new flowers marching boldly into their world.  If I can do that then I think, like these tiny and fragile and yet rugged flowers, I can come out of my own “winter” too.  Perhaps not as pretty as they are, but every bit as much alive and ready for the next adventure.

3 Responses to Mountain Idyll before the Storm